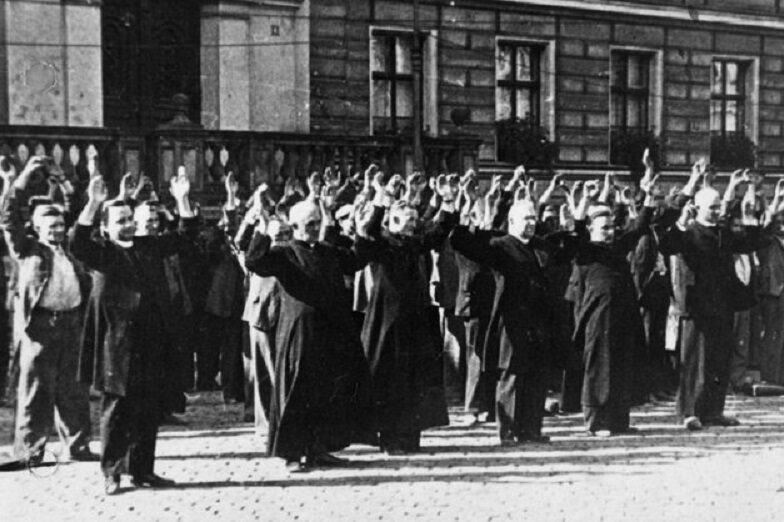 “German Nazis executed the same plan in Poland, which was implemented earlier by the Bolsheviks in their own homeland. The destruction of the „head” of the nation opens the path for doing virtually anything with the rest of society” – says Professor Bogdan Musiał.

PIOTR WŁOCZYK: Initially, Hitler was not entirely sure about what he should do with conquered Poland. When did this change?

PROF. BOGDAN MUSIAŁ: Stalin’s position ended up being the deciding factor. It was the Soviet dictator’s dream to have a war in the West. If a rump Poland were to remain, resembling the condition of the Protectorate of Bohemia and Moravia, France and Great Britain would have a pretext to make peace. In such a scenario, the war would quickly come to an end. However, Hitler did not truly intend to have a war with London, he treated the British as potential allies.

Great Britain was supposed to be a naval empire, while the Third Reich a continental one.

Exactly. Stalin knew this and that is why towards the end of September ’39 he pressured Germany into confirming that no rump state would be formed on the occupied territory. Poland was to be completely erased from the picture.

Stalin wanted the West to initiate another war in its own circle. This dream, which was also shared by Lenin, Trocky, and other key Bolsheviks for years, was Stalin’s primary objective. It is worth remembering that in order to plant the seeds of chaos, Stalin helped Hitler in his rise to power. He then instructed the German Communist Party that their militia should shift their focus away from the Nazis and prioritize the Weimar Republic as its main target. And they succeeded in this together. Later on the German communists were virtually defeated, but for Stalin the most important factor was that along with their ideological twins – the Nazis – they were able to achieve the most important goal, the destabilization of the Weimar Republic. Evidently, Hitler and Stalin, two radically leftist ideologues, thought in similar terms. After September 3rd, 1939, following the declaration of war by London and Paris, Hitler was already condemned to ally with his Kremlin colleague.

Let’s backtrack to the period prior to 1939. How did the Nazi propaganda towards Poland look like?

After 1933, in particular following the non-aggression pact between Berlin and Warsaw in January 1934, the German elites were in shock. The Germans could not fathom how they were supposed to tone down their anti-Polish sentiments. It is worth remembering that the anti-Polish policies largely shaped German internal and external politics ever since Poland gained its independence. The destruction of the Polish nation or at least regaining the eastern territories lost during World War I was always Berlin’s top priority. It is therefore understandable, that the Weimar Republic looked upon Soviet Russia with sympathy. What Hitler did in 1939 is not a paradox but a return to Rapallo and the Berlin Treaty from April 1926. The latter in particular is hardly mentioned at all in Poland. It was an extension of the terms of Rapallo. It constituted an economic alliance but it was joined by a military formation. A natural consequence of this was the planned partition of Poland, although this concept was not brought forward directly like in the Molotov-Ribbentrop Pact.

In mid-August 1939, when all the economic matters had been decided on a relevant agreement signed (August 19th), the Germans proposed to renew the agreement from Rapallo or the Berlin Treaty. When I was in the process of writing my book on the background of the Molotov-Ribbentrop Pact, this was an eye opening matter. For the Nazis, the renewal of agreements with the Bolsheviks from the period of the Weimar Republic was something completely natural. It was a return to the politics of Walther Rathenau who hated Poland with a passion. On a separate note, several years ago Donald Tusk received an award in his name. Did he not realize who Rathenau was? But he was no exception. It must be clearly understood that the Weimar Republic was a nation that hated Poland to the core.

It was met with euphoria! In the spring of 1939, the propaganda from the period of the Weimar Republic simply returned in full. Goebbels was no genius. The Germans were ecstatic that they can speak “the truth” about Poland and its people. The difference between the Nazi and Weimar propaganda against Poland was that the former introduced the element of racism. This component appeared quite late – in the summer of 1939 – when “scientific evidence” was presented to justify categorizing the Polish people as subhuman.

So the German soldiers that attacked Poland did not have to be coerced or encouraged in their hatred. All that was needed was for Goebbels to remove the political muzzle.

The Germans not only escalated an atmosphere of hatred towards Polish people but that of contempt as well. That is why it was difficult for them to come to terms with the loss of eastern territories. The Germans believed that Poles took advantage of temporary German weakness and solely through the help of the French stole a portion of their country.

By August 1939 at the latest, the Germans already had an initial plan concerning the liquidation of the Polish elites. Obviously, an action of extermination may be freely conducted solely during the time of war, when international attention is directed at news from the front. During peacetime mass murders are much more difficult to conduct. Germans knew this and that is why, without wasting any time, they immediately began to exterminate Polish elites. Why did the Germans postpone to the genocidal AB operation until May of 1940? Because attacking France concentrated the attention of the whole world on this event and any news of extermination of thousands of Polish elites was lost in the massive flood of information coming from Western Europe. German Nazis carried out the same plan in Poland which was previously implemented by the Bolsheviks in their own country. The destruction of the „head” of the nation opens the path for doing virtually anything with the rest of society. There is no need to speculate about German plans towards the Polish inhabitants of the General Government. Everything has been clearly described in the journal of Hans Frank, including his conversation with Hitler on this very subject.

The primary goal was the destruction of Poland as a nation. Poles were deemed as people without cultural heritage. It must be underlined, that whereas Germans already knew that they were going to murder the Polish elites, their plans towards the Jews were not fully specified. Various options in this regard were on the table. There was talk of Jews being locked in a “reservation” or transported to Madagascar. Extermination of Jews became binding policy along with the German attack on the USSR.

Poles were supposed to be able to provide their signature, count to a hundred and that was all. This was the minimum necessary requirement for German bauers and industrialists to be able to freely use the Polish workforce.

Professor Bogdan Musiał is a historian specializing in 20th century Germany, the author of numerous works on German war crimes in occupied Poland (including “Who is going to help the Jew…” – „Kto dopomoże Żydowi….”).

This interview was published in September 2021 in “Do Rzeczy” weekly magazine.